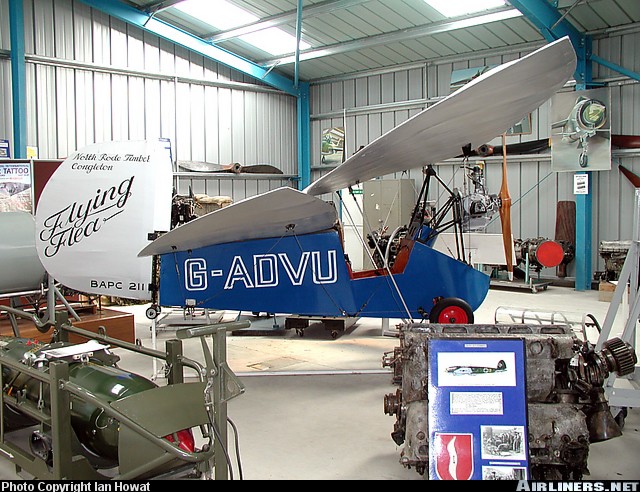 The aircraft has been likened as a prototype of the present-day microlight.

The aircraft had two large wings, one behind the other in tandem, no tailplane, no elevators and no ailerons. The back wing was fixed, while the front one was movable to allow pitching control.

It first flew on September 1933

The HM14 became all the rage in France for amateur construction. In Britain, it was sponsored by the Air League to enable people of modest income to take to the air. By 1935, about 100 were flying.

On August 13 1935, Mignon flew to Britain (after crash-landing at Calais the previous day), sponsored by the Daily Express . The Flea was already known in Britain. The Daily Express in particular, had been reporting the antics of this unusual Frenchman and his aeroplane for quite some time. A young flying enthusiast, Stephen Appleby, had already built himself a Flea. This one was registered G-ADMH and received Permit to Fly Number 1 on July 14, 1935. Just eleven days later, Appleby flew at Heston and crashed, landing upside down in an adjacent field. He was unhurt and the Daily Express provided him with the money to rebuild. The story of the Appleby Flea was closely followed by the paper-and its wide readership. The Flea was a good story and a drop in the ocean as regards cost.

The Appleby Flea was rebuilt incorporating some design changes which were suggested by sailplane designer L. E. Baynes, who had witnessed the crash of the first one in the Heston cabbage patch. These modifications included increasing the wing span by five feet (and this also meant different, stronger spars) and moving the front wing pivot point further forward relative to the chord line. On 5 December 1935, it flew across the English Channel.

However after a number of crashes, the Flea was banned in 1936 - at high angles of negative incidence, the pilot was unable to raise the nose. Cynics claimed it should be called the Crashing Flea, rather then the Flying Flea.

Other Pou de Ciel Pages on the Internet