Short B.25 Sunderland (Under Construction)

Military General Reconnaissance Aircraft - Unfortunately, we don't have one, but it is our emblem

It was the military development of the C-class Empire flying boat, and ultimately the Scion Senior.

The Empire Flying Boats first flew in 1936. On 3. July 1936, the prototype Canopus took off for the first time, from the River Medway.

For the first time in a British flying boat, there were two decks.

The engine was a radial engine, which was the common type used then for aircraft where speed was not so important - they were easier to maintain etc.

The range of the Empire Flying Boats was 1220 kilometers.

20 October Canopus to Imperial Airways, scheduled for Brindisi and Alexandria.

27 in all, without a prototype, although a great deal of experience from Scion Senior 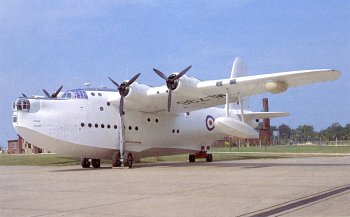 The maiden flight of the Sunderland took place on 16 October 1937, from the River Medway at Rochester.

Not generally known that Shorts were building a military version.

It joined RAF in the summer of 1938, with 230 Squadron, who were then based in Singapore. They flown to Singapore from June to December, from Pembroke Dock.

During the war, it was patrolling over the world - the Atlantic, Indian and Pacific Oceans. Its first U-Boat kill was on 31 January 1940, when an aircraft from 228 Squadron of Pembroke Dock scuttled U-55. Two months later a Sunderland fought off an attack from six Ju-88s. It protected convoys and picked up survivors from sunken ships.

During the early stages of the war, the Sunderland and the Anson were the two aircraft on which Coastal Command could rely. The Command continually voiced reservations about their seeming 'second-class' status in comparson with Fighter and Bomber Commands. Later on they did receive greater priority, receiving more modern aircraft that could effecively battle to end the U-Boat menace to convoys, for example.

According to some sources it was known as the Flying Porcupine, because it had 12 machine guns. Also 1000 lbs (454 kgs) of bombs.