Soviet work in turbojet engines had begun in 1938 with the experiments of Arkhip Lyulka and his assistants I.F. Kozlov and P.S. Shevchenko, on the VRD-1, an axial-flow engine with an eight-stage compressor and a projected thrust capability of 600 kgs. The initial calculations had been carried out in Kharkov, but a special factory was provided in Leningrad for the construction of the engines.

The German invasion postponed Lyulka's experiments - he was sent elsewhere on other 'more important' work, but by the end of 1942 they were back in Leningrad (still under siege). Further engines were produced - VRD-2, VRD-3 (also known as S-18), and by the end of 1944 he had developed the TR-1, a more advanced power plant capable of producing 1300 kgs of thrust. This latter engine was used by Il-22 and Su-10 bombers.

From February 1945, Soviet forces advancing into Germany started to gain possession of BMW 003 and Junkers Jumo 004 engines. The first jet-powered flight to be take place in the Soviet Union itself was that of a captured Me 262 on August 5, 1945, piloted by Colonel Andrei G. Kotchetkov, somewhere near Moscow.

The MiG-9 leant heavily on German technology, but is considerd to include also considerable Russian design. The engines were effectively two BMW 003 jets mounted side by side within a semimonocoque fuselage. Similar in performance to the Gloster Meteor, the MiG-9 had a better thrust-to-weight ratio, but higher wing loading, than the Yak-15. The MiG-9 suffered from modest performance (maximum speed of 900 km/hr at 5000 meters) and handling because of its primitive engines.

Developed by Yevgeny Adler of the Yakovlev design collective, the Yak-15 was effectively a Jumo 004B engine married to the airframe of a piston engine Yak-3U fighter, although a comparison will show that the front fuselage was obviously re-designed to accomodate the new engine. The prototype first flew on 24 April 1946, about one hour after the first flight of the Mig 9 (apparently the decision as to who was to fly first was decided on the toss of a coin).

In late spring 1947, a version with tricycle landing gear, the Yak-15U (U standing for Usovershenstovanny, or "improved"), was introduced.

The Yak-15 was the first jet fighter to enter Soviet Air Force service and some 280 were built. It was mainly used in the training role to give Soviet pilots jet experience before going on to the Yak-17 and Mig-15.

It was later refined into the Yak-17, which also introduced wingtip fuel tanks to compensate for the sacrifice in fuselage fuel capacity to accommodate the nose wheel. In general, the early Yaks were pleasant to fly and were ideal interim fighters for the first generation of Soviet pilots to make the transition from piston- to jet-powered flight. 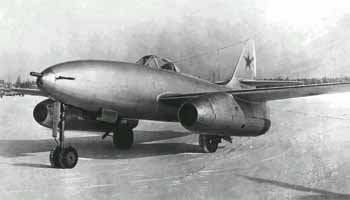 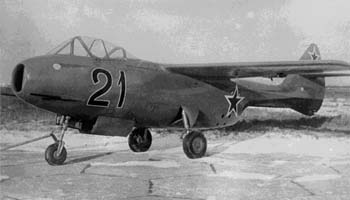 Semyon Lavochkin's La-150 was first flown in September 1946. The La-150 had a single Jumo 004B engine and was of pod-and-boom configuration. It was heavier than the Yak-15, and its performance was handicapped further by a substantial wetted area, on top of which its shoulder-mounted wing produced an excessive dihedral effect and its tail boom tended to oscillate dangerously. It was quickly abandoned.

Vladimir Klimov organized the production of the RD-45 from August 1947. 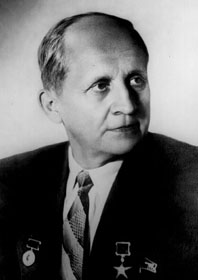 In September 1939, the Soviet government appointed Sukhoi to head a new organization named the Experimental Design Bureau No. 134 (OKB-134) in Kharkov, Ukraine. There, he designed the Su-6 ground-attack aircraft. Although he produced several excellent designs during the 1930s and 1940s, he was never able to achieve success due to a combination of testing accidents, political opposition, and Stalin's personal whims.

Sukhoi used the German Me 262 and modified it to build his own Su-9 fighter. The Soviet Air Force never used the aircraft, partly because Stalin criticized Sukhoi for simply copying an old German aircraft instead of proposing an original Russian design. Ironically, it was at the very same time that Stalin had ordered Tupolev to make an exact copy of the American B-29 Superfortress.

Despite the setback, Sukhoi doggedly continued to pursue more advanced designs including the supersonic Su-17, a prototype for a frontline fighter. Eventually, Stalin grew intolerant of Sukhoi's work and closed down OKB-134 in November 1949; Sukhoi's team ended up as a subdivision of the Tupolev design organization.

Sukhoi's secondand far more successfulcareer began after Stalin's death in 1953. In October, he was put to work at a plant in Moscow where he formed a new organization known as OKB-51. The current Sukhoi company grew from this organization. 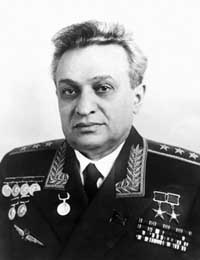 At the turn of the century, there are more MiG fighters in service around the world than any other type, about 20 percent of the world's total.

MiG was founded as an independent design department in December 1939 by Artem Mikoyan. He had worked as a mechanic in the 1920s before graduating from a military academy in 1937. He worked briefly in the late 1930s for Nikolai Polikarpov, a famous Soviet aviation designer. When Mikoyan began his independent work in 1939, he joined forces with Mikhail Gurevich, an accomplished aeronautical engineer who had recently visited the United States to negotiate a license to build a Soviet version of the Douglas DC-3. Mikoyan and Gurevich's first design was the I-200 high altitude interceptor that eventually bore the name MiG-1. Although the MiG-1 was an excellent aircraft, the Soviet Air Force used it sparingly since high altitude interceptors were not in demand at a time when the Soviet Union was facing German strategic bombing attacks. Few MiG interceptors, in fact, saw action during World War II, and it was only in the postwar era that the organization, known by then as the Experimental Design Bureau No. 155 (OKB-155), grew rapidly in size and influence.

Using engine technology captured from the Germans after the war, Mikoyan and Gurevich produced the first Soviet jet fighter, the MiG-9. Later that same year, in August, Joseph Stalin ordered Mikoyan and Gurevich to have ten of these aircraft prepared for a fly-past in Moscow during a national parade. Fearing for their lives if the order was not fulfilled, engineers worked around the clock for two whole months to produce ten MiG-9s in time for the October demonstration. Ironically, the actual parade was canceled due to poor weather. But the MiG-9 entered service with the Soviet Air Force soon after. 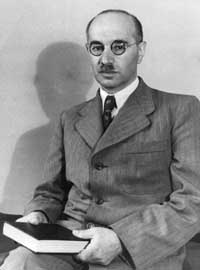 The MiG design bureau became vry productive the Soviet Union's most famous high-speed jet fighters. These included the MiG-15, the MiG-17 (capable of supersonic speeds), the MiG-19 (the first mass-produced Soviet supersonic fighter), and the MiG-21. The design bureau produced more than 9,000 MiG-21s in as many as 32 versions for the Soviet Air Force. Several countries including China, Czechoslovakia, and India also produced their own domestic versions of the MiG-21.

The last major fighters under Mikoyan and Gurevich's leadership were designed in the 1960s. These included the MiG-23, the first operational variable geometry jet fighter in the Soviet forces, and the Mach 3-capable MiG-25 interceptor. Mikoyan died in 1970 and was succeeded by his deputy Rostislav Belyakov. Gurevich retired earlier in 1964.

With Belyakov at the helm, the MiG design bureau produced several new fighter aircraft for the Soviet Air Force. These included the MiG-29 attack light interceptor and the all-weather MiG-31 fighter interceptor, both of which first flew in the 1970s.

Latterly, MAPO MiG has turned to export sales of modernized versions of the MiG-29. Despite a distinct lack of government interest, it has continued developing advanced fighter concepts, including the mysterious 1.42 multifunctional fifth generation fighter, said to be capable of outperforming the American F-22 Raptor. The 1.42 (also known as the 1.44I) took off on its first flight in February 2000 and is competing with a similar Sukhoi design to satisfy requirements for a future generation of Russian fighter aircraft.

In 1946, the British government allowed the export of Rolls-Royce Derwent (and Nene) engines. The Derwents were built by the Russians as the RD-500. Yakovlev put the RD-500 in a final refinement of the basic Yak-15 formula, the straight-winged Yak-23, which featured the first ejector seat in a Soviet fighter and entered service in 1948

In 1946, the British government allowed the export of Rolls-Royce Nene engines which the Russians eventually built themselves as the RD-45 (and, in facr. a total of 39.000 such engines were produced). Mikoyan and Gurevich built an original sweptwing fighter around one of the imported British Nenes, an aircraft know originally as the I-310, which first flew on December 17, 1947.

The MiG-15 was a surprise to the West, for it not only advanced Soviet jet technology faster than anyone had expected, but it also gave the Soviet Union a fighter that could outperform anything in the West except for the F-86 Sabre. During the fighting over Korea between 1950 and 1953, the MiG proved capable of outmaneuvering and outclimbing the Sabre, while the Sabre could outdive the MiG. In combat, however, the MiG-15 revealed one fatal weakness--an unstable gun platform, especially in a dive, where it had a tendency to snake. Soviet pilots who flew the MiG-15 over Korea found that to be a serious handicap, which was even more grievous for its less experienced North Korean and Chinese pilots.

The problem was recognized by the MiG team, which remedied it by lengthening the fuselage and completely redesigning the wing to create the MiG-17, one of the outstanding jet fighters of the 1950s--and even of the 1960s. This was only the beginning for Mikoyan and Gurevich, whose wartime products had previously been known only for their mediocrity. The jet age was to make MiG a household word.

The prototype Yak-30, which looked similar to the MiG-15, performed well enough, but did not fly until September 1948, by which time the MiG-15 was about to go into production.

Lavochkin's shoulder-wing La-15 did get a small production contract. It was developed from the La-174D prototype which first flew in 1948 as a lightweight fighter although eventually this role would be won by the MiG-15. The La-15 had a high-wing which was swept, and was able to attain speeds of just over 1000 km/h. It was first revealed in 1949 at the Tushino Air Show. It had better armament than the comparable F-86 Sabre but was also much lighter and It apparently had excellent manoeuvrability and was one of the first jet aircraft to feature a pressurised cockpit. The type was in service until 1954.